Workshop Report
“The Future of Japanese Studies – Thinking through the life and work of Prof. Ezra Vogel”
Co-organized by Japan Foundation, HIJAS, and ESOP Program at Hosei University

On July 16th, 2022, the Japan Foundation and HIJAS organized a collaborative event, “The Future of Japanese Studies – Thinking through the life and work of Prof. Ezra Vogel.” The event aimed to discuss the state and future of Japanese studies by examining the documentary film of Dr. Ezra Vogel, a renowned Japanese Studies scholar who recently passed away in 2020. We watched the film with students taking the course Global and Transnational Japan at the Hosei University ESOP program. Also, guests from the US and Germany – Dr. Max Ward and Ms. Alexandra Roland- guided students’ group discussions and provided insightful comments.

The film, recently released in May 2022 by Japan Foundation, portrays the development of Dr. Vogel’s best-selling book Japan as Number One: Lessons for America (1979) and his long and profound relationship with Japan as a sociologist and as an individual. We asked students to provide their overall impression of the film and discuss questions such as “If Dr. Vogel was alive, how would he evaluate Japan now?” Combining it with comments by the guests and Japan Foundation representatives, we had a fruitful discussion in English during the two hours session.

The cultural and regional backgrounds of the participants varied from Europe, Asia, and Japan, and thereby their perspectives toward Japan also was naturally diverse. What was common among the students, however, was that most of them had never read Dr. Vogel’s book on Japan. For those international students who see Japan from an “external view,” the film became an opportunity to know the origin of the positive image of Japan that they have come across in the past. On the other hand, Dr. Vogel’s work was rather a surprise for Japanese natives. For young students who were born and raised (or going back and forth between Japan and overseas) after the rapid economic growth and its succeeding downturn, the acknowledgment by an American scholar of Japan as a country giving “lessons for America” brought fresh insight into the history of their country.

The film of Dr. Vogel is a valuable material for deepening International Japanese Studies that look at Japan by combining internal and external perspectives in different times and spaces. While we could not fully explore the other question posed by the Japan Foundation members, “what would be the rationales to support Japanese Studies Specialists overseas?” this is an important topic that we should continue to explore in future events. 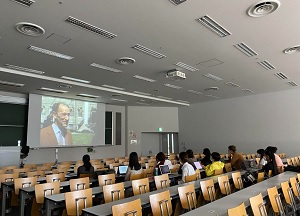