Between November 6th to November 8th, Hosei University Research Center for International Japanese Studies has co-hosted an international online workshop with the Consortium for Global Japanese Studies and Centre Européen d’Études Japonaises d’Alsace.
There were twelve presentations, including two key note speeches and ten presentations from young scholars selected from Japan and Europe.

● Summary of the presentations

[Keynote 1]
Hideto TSUBOI (International Research Center for Japanese Studies Nichibunken, Japan)
“World Literature and Japanese-Language Literature (Nihongo Bungaku)”
The global approach is becoming an influential paradigm in humanities, most notably global history in historical studies. The presentation discusses how we can employ a global approach to literary studies and how it would shift the existing field of literature. The presentation explained conceptual differences between the “international” and the “global” as well as the politics involved in the categories in the field of literature, for example, the “Japanese literature” and “foreign literature.” The presenter emphasized the potential of the concept of “world literature” to fluidize the boundary between “Japanese literature” and “foreign literature” and also argued the importance of bringing in “Japanese Language Literature (Nihongo Bungaku)” instead of the category of “Japanese literature.” This keynote speech became a valuable reference point while discussing the global transformation of Japanese culture and Japanese studies throughout the three-day workshop.

[Presentation 1]
Hidemasa ISHIGURO (INALCO Institut National des Langues et Civilisations Orientales, France)
“An Anonymous Narration: Genbun Itchi Movement from a Linguistic Point of View”
The presentation discussed the Genbun Icchi Movement by focusing on the linguistic usage of “-ta.” The presentation first introduced Kojin Karatani’s interpretation of Genbun Icchi – it is a new creation of narration, and it is a style to neutralize (chūseika) the narrator. Then, following the linguistic and philosophical debate, the presentation attempts to explain the characteristics of Genbun Icchi style. Firstly, the presenter points out the “non-reportive” style of Genbun Icchi that narration takes place without a narrator. Secondly, the author emphasizes the importance of the binary opposition of “-ta” and “- ū” forms that do not induce any speaker-hearer distinction. Hence, the presentation concludes that the combined usage of “-ta” and “-ū” forms generates a closed communication system of the Genbun Icchi style.

[Presentation 2]
Gad Hai GERSHONI (Nagoya University)
The presentation discussed the usage of English-derived vocabulary (EDV) in Japan. There are approximately 50,000 EDV words, which constitutes roughly 10 percent of the entire Japanese language. The presenter examined how recent EDV such as “akahara,” “pawahara,” or “ikumen” were developed and instilled. It argued that the reason for the EDV to become so common in Japan was because rather than using original Japanese, EDV is more euphemistic and thereby enables to draw more attention from the audience.

[Presentation 3]
Louise ROUSE (Geidai, Tokyo National University of the Arts)
“Syncretic Types: Polyphony in the Typography of Tokyo”
Following linguistic and philosophical debates of Mikhail Bakhtin’s “the diversity of language” and Ludwig Wittgenstein’s argument of the “impossibility of private language,” the presentation explored the visual semiotics of Tokyo’s patchwork urban typography. Here, the presenter uncovered the rich and diverse urban typographies designed with kanji, katakana, hiragana and even Hangeul, and other non-Japanese typographies. During the presentation that combined philosophical debate and aesthetics of typography, the presenter also introduced innovative mapping data that visually shows diverse forms of typography that exists in various parts of Tokyo.

[Presentation 4]
Kuriko SHINOZAKI （University of Strasbourg, France）
“The Relationship between the Post Graduate Japanese Language Learners in the University in France and Japanese Pop Culture – What Kind of Japanese Culture French Post Graduate Students are interested in through the Post Graduate Japanese Oral Class?”
The presenter discussed the relationship between Japanese language education and Japanese pop-culture consumption from her own teaching experience in France and interview research. France is the second in the world in consuming Japanese manga after Japan, and thereby J-Pop culture has been the entering point for many French students learning Japanese. From interviews with French students, the presenter indicated how J-pop culture consumption as a hobby could positively impact their Japanese language ability. Furthermore, the presentation also suggested that Japanese language learners who improved their Japanese through formal and informal learning would later extend their interest in Japan beyond initial pop-culture and explore other parts of Japanese culture and society. The presenter also showed examples of students considering living and working in Japan in the future as a result of this process.

[Presentation 5]
Xiaoyao YE (Sokendai, the Graduate University for Advanced Studies)
“Words which are Given: An Examination of the ‘National Language’ Education in Manchukuo through Yasurnari Kawabata’s Beautiful Journey”
The presentation analyzed Yasunari Kawabata’s “Utsukushi Tabi (The Beautiful Journey)” and examined the meaning of Manchukuo for the Japanese during the occupation period. “Utsukushi Tabi” was a Shojyo shosetsu – a novel for young girls – which portrayed disabled girls in Manchukuo. The presenter considers that Kawabata’s interactions with young boys and girls from Manchuko led him to write a “Utsukushi Tabi” with a superior perspective over Manchuko by the Japanese.

[Presentation 6]
Zhixi YIN (Osaka University)
“Dynamic Positionality of Japanese Literature: Translation and Interpretation of Mishima Yukio in China”
The presentation examined how Yukio Mishima’s well-known texts – “Yūkoku (Patriotism),” “Hojyo-no-umi (The Sea of Fertility)” – were translated in China throughout the 1970s to 1990s. The presenter showed the relationship between Mishima’s political opinion and China’s political situation at that time. It further explores how Chinese writers Yu Hua, Mo Yan, and Yan Lianke read and interpreted Mishima’s work based on their interests.

[Presentation 7]
Silke R.G. HASPER (Heidelberg University, Germany)
“Religion, Covid-19, and the Digital World: How a Global Pandemic Transforms Religious Practices”
Covid-19 has changed the way we communicate across the world, including various religious activities. How did remote communication using online technology transform the religious activities of mindfulness? The presentation tackles this timely topic by exploring the practices of religious organizations and individuals. The presenter introduced various attempts by the religious communities to overcome the restriction of face-to-face communication, including the online format of the prayer and online preaching using YouTube. The presenter also showed the example of a mindfulness group creating a Facebook page to organize online meetings. While Covid-19 seems to develop a new way of forming religious communities, the floor also raised a broader question of whether the Covid-19 is beneficial for religious organizations to expand its activities.

[Presentation 8]
Mina BANG (Osaka University)
“The Korea Images Represented by Kato Shorinjin who Settled in Korea during Colonial Era”
The presentation examined Japanese painter Shorinnjin Kato who was residing in Korea during the Japanese occupation era. By examining Kato’s life journey and his work painted before and after the Second World War, the presentation attempted to reexamine the characteristics of Japanese painters’ characteristics in Korea in the context of East Asian art history. The presenter showed that Kato was a prominent figure in the Korean art circle during the colonial era. After the war, he aimed to establish “Asian Art” based on his past living experience in Korea.

[Keynote 2]
Yusuke SUZUMURA (Meijo University)
“What Crosses Borders Is Beyond the Frontiers and Remains within the Boundaries: A Structure of Diversity in Kimetsu no Yaiba”
The presentation examined “Kimetsu-no-yaiba” a Japanese manga recently popular in Japan and worldwide. Through analyzing entire 205 stories published between 2016-2020, the presenter demonstrated that the “Kimetsu-no-yaiba” had a typical structure of Japanese manga that are common with other popular manga such as “Dragon Ball” or “One Piece.” The presentation also showed that the manga overemphasized certain aspects of our diverse and complex world by simplifying characters’ personalities, attributes, and functions.

[Presentation 9]
Felipe Augusto SOARES MOTTA (Osaka University)
“Historicizing Oppression: Japanese Immigrant Intellectuals and the Memory of Nationalism in 1930-1945 Brazil”
The presentation discussed the relationship between the Japanese Brazilian migrants and Brazil society in the immediate post-World War Two era through analyzing the activities and writings of three migrant intellectuals – Rokurō Kōyama (1886-1976), Kōichi Kishimoto (1898-1977), Tomoo Handa (1906-1996). The examination of “Kachigumi (the winners) – Makegumi (the losers)” disturbances showed the complexity and difficulties, while the migrants’ community experiences the war defeat of their home country being far apart.

[Presentation 10]
Alexandra ROLAND (University of Duisburg-Essen)
“Don’t Touch my Dignity! : The Rise of Hate Speech in Japan and the Development of a Japanese Anti-Hate Speech Law”
From around the 2010s, Japan also experienced the rise of hate-speech, mainly targeting Korea and Korean residents in Japan. Against this racist upsurge the Japanese government established anti-hate speech law in 2016. By following Tsutsui and Shin’s theoretical approach that combines world society theory and social movement outcome theory, the presentation analyzed the processes in which this law was enacted. While Japan joined The United Nations’ International Convention on the Elimination of All Forms of Racial Discrimination in 1995, it was not sufficient for the country to develop anti-hate speech law. The presentation showed that it was primarily the combination of events and actions in the 2010s that finally led to the enactment of the law. Those were the radicalization of hate-speech mainly by Zaitaokukai, the emergence of counter-movement, and Japanese politicians merging the global human-rights discourse with the discussion from the local activism in Japan.

● A report on the round-table discussion

Overall, commentators gave positive feedback about the workshop and presented papers, especially in terms of the topic’s innovativeness, the relevance of the subject in today’s societal and political context, and the diversity and multiplicity of methods employed.

Yet, from an organizational perspective, commentators made the following points to further improve the workshop.
1. Requires prior preparation for the participants, such as reading presentation material before the workshop to engage in a more in-depth discussion.
2. Better to have even more diversity in presenters coming from different parts of Europe and beyond.
3. Spare more time to discuss the methodological approaches of the presentations. 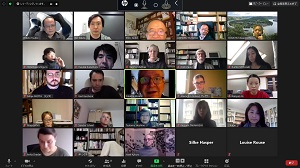 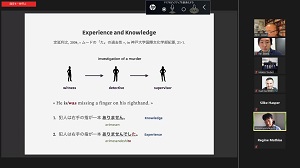 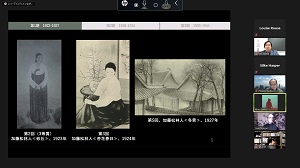 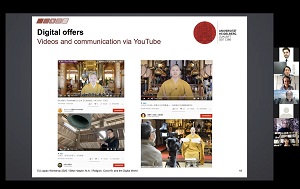